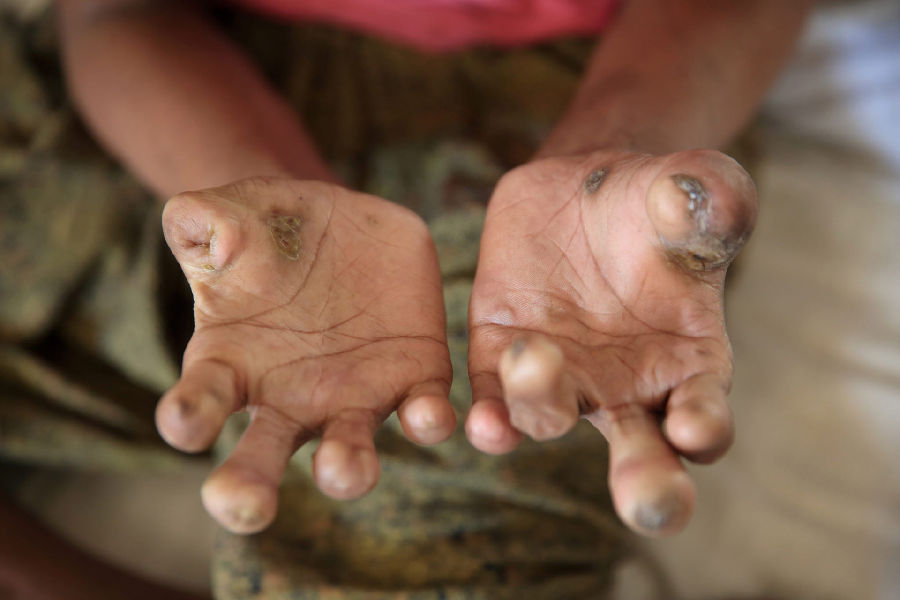 Learn all about leprosy, a chronic disease transmitted from person to person and, if not treated correctly, can cause progressive and permanent damage to the skin, mucosa, nerves, eyes, and extremities.

Leprosy, also known as Hansen’s disease – by the Norwegian doctor who isolated the bacillus – is a chronic infection caused by the bacterium Mycobacterium leprae, which mainly affects the peripheral nerves, the skin, the eyes, and the mucous membranes of the upper respiratory tract.

The condition is characterized by skin ulcers’ appearance and causes neurological damage that results in a lack of sensitivity in the skin (they stop perceiving sensations of heat, cold, and pain) and muscle weakness.

When the patient is already being treated with the appropriate medication, it is not infectious.

Despite the popular myth that accompanies leprosy, Hansen’s disease is a disease that has a cure and is not very contagious, although it is still far from being eradicated.

It is still present in more than a hundred countries, among which India stands out, which accounts for 58% of all new cases detected, followed by Brazil and Indonesia. In 2019, 202,185 new cases of leprosy were registered in the world, according to WHO data, and relapses are on the rise.

Despite the fears that it arouses, leprosy is a very difficult contagion disease since it is estimated that more than 90% of the population has a natural resistance against the bacterium Mycobacterium leprae.

Even if they are exposed to its pathogenic agent, they can catch the infection and not suffer from the disease, thanks to the fact that their immune system prevents it from developing.

Furthermore, leprosy is not a hereditary disease. It is mainly environmental factors such as lack of personal hygiene or housing, poor nutrition, and difficulty accessing treatment as soon as the first symptoms appear, factors risk associated with the appearance and spread of the disease.

Leprosy-causing bacteria called Mycobacterium leprae or Hansen bacillus. The human being is the only reservoir, that is, the only known target of this disease. From a microbiological point of view, it resembles the tuberculosis bacillus. It needs to enter human cells to infect, with a special affinity for skin cells and peripheral nerve cells (Schwann cells).

Transmission is not fully understood, although it seems that people who live with an individual suffering from leprosy are at greater risk of suffering from it. Still, this will depend on the individual response of each person and their defenses. It seems clear that it is in marginalized and underdeveloped environments where most cases occur, being endemic in some areas of the world, such as Southeast Asia, India, and Burma.

Airborne transmission has been considered one of the most probable causes of leprosy infection, with nasal secretions being its main source, with many bacilli.

The skin lesions ulcerated can also be a source of infection. Even in some scientific works, it is postulated that objects in contact with leprosy patients could contain germs. The disease can be transmitted or contagious even up to three months after starting a correct treatment by the patient. The vulnerability to get sick will depend on the defenses of each person.

It seems that it does not usually affect children under three months of age and that pregnant women could transmit the infection to their fetuses. Therefore, they should be monitored in this situation for a later diagnosis of the newborn.

Users Can Write for All the Late Fees to Be Removed

Why Is Solar Energy A Better Option And How Is...

A Guide on the Best Vacuum Pumps, Vacuum Chambers, and...

Advantageous things to consider and learn about the game boosting...